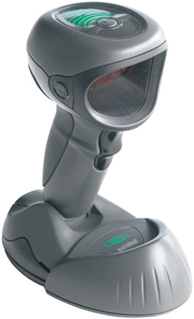 USB scanners have a long cord and connect-to and are powered by a computer.  The scanner emulates the keyboard, to input RFID tag # data into the ARMS database.

A primary use of USB RFID Scanners with the ARMS Armory Management System is to commission RFID #’s to the ARMS database.  When weapons, gear, ammo or containers are enrolled to the ARMS database, a RFID tag is placed within or on the weapon.  Using touch screen or mouse, the cursor is placed in the RFID # database field for the object’s database record.

The top trigger on the device triggers radio wave transmission from the scanner, which detects the weapon or other object’s tag.  The RFID tag # is entered into the database and is connected to the weapon or object’s serial # and/or other identifying data.

Whereas issue/return windows and doorways can be outfitted with RFID antennas for passively tracking weapons, gear, ammo and containers, a USB scanner provides a cost-effective method for identifying objects during issue and return transactions.  The scanner supports both RFID and bar coding, enabling rapid and accurate scanning of weapons, gear, ammo and containers when being issued to personnel and when being returned to an armory.