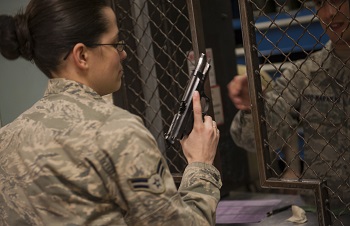 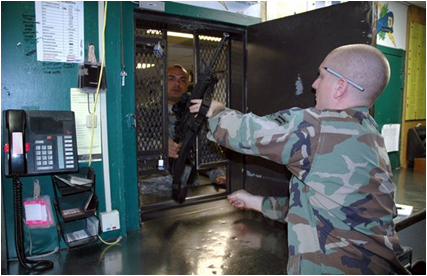 When police special forces or military security personnel present to the armory to return weapons, gear and ammo, they are validated by selecting their name from within the ARMS software, or, by scanning ID card, entry of PIN # or fingerprint scan.

Each object being returned can be updated to location = armory utilizing the ARMS’s software batch tracking screen, or, will display as photographs on the touch monitor.   Once all objects are returned, the armorer will receive an alert within on the ARMS software screen if any weapons, gear or ammo issued to the officer or solider for the post or event were not returned.  If any object is not returned, ARMS maintains a ‘flag’ on the soldiers or officers ARMS database record, which will create an alert for the armorer the next time the officer or solider presents to the armory.

Each weapon, gear or ammo ARMS database record is updated for the object including the person that returned the object, the armory to which returned and the time/date.  ARMS maintains a complete transaction history of all weapons, gear and ammo from time of acquisition through final disposition.