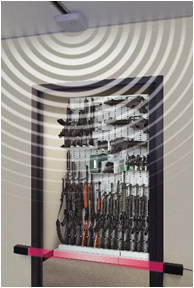 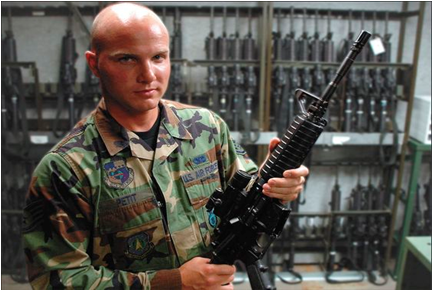 The ARMS Armory Management System includes the ability to tag weapons, gear and/or ammo with RFID tags, that can be detected by RFID antennas at exit point(s).  ARMS software keeps track of the expected locations of all weapons at all times, and detects when a weapon is exiting an armory in an unauthorized manner.

If any tagged object is approaching an armory exit, the person’s movement will be detected by motion sensors, and the RFID security antennas and alarm system will become active status.  If the person approaching the armory exit has any tagged object’s in their possession, the RFID antennas will detect the tag(s) and send a message to the ARMS software with the tag data and the exit location.  If any of the tagged objects were not issued in an authorized manner and approved for removal from the armory, lights and alarms are triggered, along with software, SMS and email alerts.

ARMS supports the triggering of video cameras, flashing lights, alarms, email alerts and SMS text alerts in an instance of an unauthorized removal of weapon(s) from an armory or warehouse depot.  Triggering of alarms, lights and alerts enable armory personnel to immediately respond to security breaches.