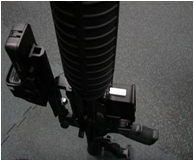 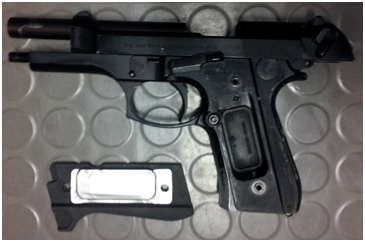 Weapons, gear, ammo and containers can be tagged with RFID tags, to enable passible tracking and engagement of security infrastructure.  RFID tags are most often placed in weapon grips, though RFID weapon and object tags can also be placed on the exterior of weapons, gear, ammo or containers.

RFID tags include an adhesive on the underside of the tag that enables adhesion to the weapon or object.  Aggressive adhesives, such as epoxies or ‘super glue’ can also be used to provide stronger bonding to the weapon or other object.

RFID weapon tags utilized with the ARMS Armory Management System have been rigorously tested with weapon cleaning systems and extensive test firings.  ARMS weapon tags are not damaged during test firings, cleanings or other normal uses of weapons.

RFID weapon or object tags include the ability to input up to 8KB of data, and, to update or add data over time.  RFID tags can include maintenance, inspection, test firing, assignments, manufacturer, lot # and other types of data.  As such, any RFID-enabled phone or RFID scanner can display key weapon data without dependence on a computer.

RFID antennas can be placed at issue/return window shelf and/or around issue/return windows or armory doorways.  When RFID-tagged weapons, gear, ammo or containers pass through a RFID-enabled window or doorway, the objects are automatically tracked as gong In or Out of the armory.

ID cards and lanyards can include RFID chip to identify the person removing or returning weapons, gear, ammo or containers:

RFID tags also enable tagged weapons or other objects to be detected when exiting an armory.  If the weapon cannot be associated with an authorized personnel RFID ID card or key fob and/or if a weapon or tagged object is exiting an armory in an unauthorized manner, the ARMS database will trigger alarms, flashing lights, email alerts and SMS text alerts.